The Devotion to Sant Blai in Potries 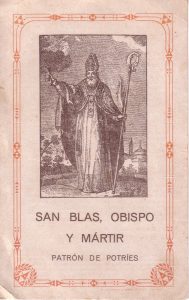 Before the conquest, Potries was a Muslim village depending on the castle of Rebollet and, like other towns in the region, it preserved for almost four hundred years its customs and religion. But after the conquest, as vassals under the rule of Christian lords. This fact was decisive for the development of the devotion to Sant Blai in Potries, since it was a village inhabited by Moriscos that had to be evangelised.

The model of holiness, protective saints and their relics has been decisive throughout history for the consolidation of Christian faith in new territories and the evangelisation of pagan people. In addition, the worship of these relics served to reinforce new sacred spaces won to the unbelievers. But what differentiated the Morisco village of Potries from other similar ones, so the relic ended up here?

The answer may be related to an influential Morisco family, the Boamits; of which, sadly, we only have few references today. Its economic power was based on land tenure and cultivation, livestock farming, but especially the trade of sugar. As with other wealthy families at the time, they probably held the public offices in the local community, and they would surely represent, in a veiled manner, the Muslim religious authority. This statement would be supported by a magnificent discovery in a house of Potries in 1789, an interesting and valuable set of Arabic books. The researcher Juan Bautista Vilar considers this Arabic bibliographic collection as the most important of all those that have been found in the Valencian area, qualifying it as a library compared to other similar bibliographic discoveries. It is reasonable to think that this bibliographic set would belong to a family established in Potries, a family with economic and social prestige that would assume the public offices of its community, including the religious authority. As we have seen, this fits perfectly with the characteristics of the Boamit family in Potries. We might even think, due to the volume and the supposed quality of the books, that the spiritual leaders in the Potries community, besides being custodians of the Qur’an precepts, would surely have a certain influence over the transmission of the Islamic doctrine, in a more or less veiled way. The religious authorities of the time would probably know that, and therefore they needed new arguments and resources to act in such a place where the study, practice and diffusion of Islam had been somehow tolerated. 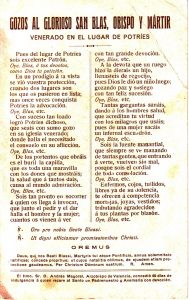 In this situation, during 1535 an important remodelling of the parishes took place in the diocese of València, and Potries was established from that time on as a Morisco Rectory depending on the church of Oliva. We can assume that a rector would give spiritual assistance to the Morisco inhabitants of Potries, but it is not clear how he would do it. We think it is also very likely that at this moment was held the transfer of the traditional Muslim sacred space, the mosque, towards the Christian worship. But it was not until 1574, with Archbishop Ribera, that the parish of Potries was created, jointly to the Beniflà parish and independent of Oliva. Probably at this time, an altar or chapel would be dedicated to Sant Blai, in a new building, which would be established since then as the sacred and spiritual space of the community.

At the end of the 16th century we find thus a Morisco place where a new space for Christian worship had been consolidated, in line with the reform of the Valencian diocese and the counter-reform movement headed by the Hispanic monarchy, and probably where, in order to reaffirm the evangelization of new Christians, the relic of a saint highly revered by the Christian church would arrive by the time of the temple’s enshrinement.

This would coincide with a particular historical moment, such as the incorporation of the lands of the County of Oliva to the house of the Borja, Dukes of Gandia. In 1551 the IV Duke of Gandia, Francesc de Borja, entered the Society of Jesus, transferring the  dukedom to his son, Carles de Borja i Castro, who shortly before (1548) had married Magdalena de Centelles i Folch de Cardona, sister of Pere Centelles, Count of Oliva. 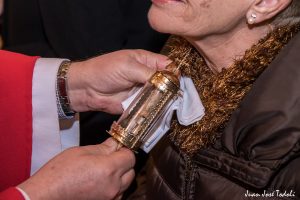 In 1569 Pere de Centelles died without offspring, and the vast possessions of the county, both in the kingdom of València and the island of Sardinia, were inherited by his sister Magdalena. But claims were raised, with a series of long and expensive lawsuits, which ended up confirming Magdalena’s right to inheritance by a sentence of the Valencian Court (1581), ratified by the Council of Aragon (1594). On February 1, 1595, Magdalena de Centelles i Folch de Cardona would take ownership over the Barony, Castle and Lands of Rebollet. This culminated the old territorial policy of the Borja family, by incorporating the Safor manors under their control.

Pere de Borja i Centelles, the second son of the Dukes of Gandia, claimed his rights over the states of Oliva, receiving the valley of Cofrents and Aiora in the 17th century. He really aspired to inherit the territories that formed the central core of the county in La Safor. According to Eugeni Ciscar Pallarés, his name appeared in the documents as Pere Centelles, Gilabert Centelles, or Ramon de Riusec. We find the use of his mother’s surname in official documents as a symptomatic fact of his aspirations. It may also be because he really loved the territory where he spent long periods of time, or because of the noble lineage that he should know perfectly. 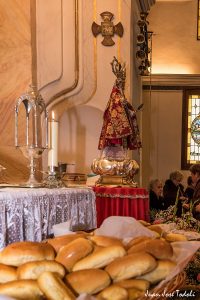 Another fact that would corroborate this wish of Pere de Borja regarding the possession of the Rebollet barony, would be the construction in Potries of a new rural palace, which we know was owned by Pere de Borja in 1611, and which could be related to the arrival of the relic to Potries.

Furthermore, we have related the construction of this new building to economic questions, linked to the control of a set of properties that, since then, the Borjas had to administer. The place chosen by this new player was the village of Potries, far from the main centres of manorial power until then (Oliva and la Font d’en Carròs). Precisely, it was next to the houses of the most significant landowners in the village, the Boamits. This marvellous building is now the headquarters of the Potries Town Council, and still preserves most of the original constructive elements and decorations, comparable to those in other noble palaces of the time (wooden beams, iron fences and magnificent ceramic pavements).

The street still maintains the same name it had at the beginning of the 17th century, Boamit Street.

All these factors may have occurred together, that is, a Morisco population that had to be evangelised; a new spiritual reference in the town, the Sants Joans parish church, which had to be endowed with content; and new manorial lords who wanted to reaffirm their prestige amongst the new vassals. And maybe the relic of Sant Blai and its worship came to Potries by the hand of these new lords. However, the arrival of the relic could also have happened after the expulsion of the Moriscos in 1609, during the repopulation of the village by Christian people. These Christians were essentially people from other places in the region, from other towns in the Kingdom of València, and also from Castilla.

The arrival of relics and miraculous images has always been surrounded by legends and rivalries among the towns wanting to house them, and Potries is no exception. According to oral tradition, when the relics of the saint arrived, there was a dispute among different towns to keep them. It was decided to attach the relics to a yoke, so that a pair of oxen would decide where they should remain. The animals went to Potries, where they stayed; but the other towns protested so much that the test was repeated. Up to eleven times the oxen went with the relics of the saint towards Potries, so there they were placed, in the Sants Joans Parish Church, to the present day. Precisely, these facts are described in the canticles or joys sung year after year at the end of the Mass on February 3, day of Sant Blai, during the protection ritual, which consists in passing the relic by the throat, in order to prevent throat troubles.